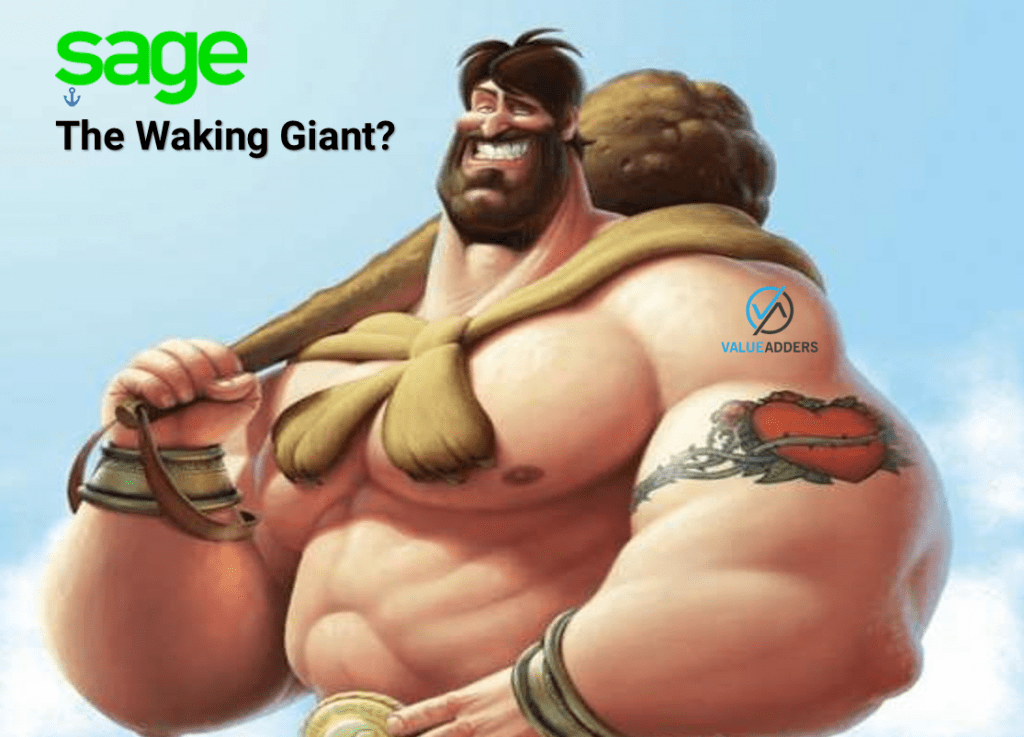 Up until this point, my admittedly narrow assessment of Sage has been less than rosy. I saw them as a huge, reactive, disjointed company who thought they were in the acquisition and investment business rather than innovative technology space. I saw a company potentially headed the way of Kodak, from a major leader to irrelevance by not understanding what market they were in.

From what I have seen, their market share has often been acquired more than developed through innovation. They own more products than many realise (most recognised in Australia: Handisoft, Accpac – now Line 300, X3, Micropay, WageEasy, Sage CRM, Pastel).

Anecdotally, they are heavily siloed. Stories abound (in Australia anyway) of the Payroll and ERP divisions residing in the same building but not working together, despite having similar channels, clients and target markets.

They were cloud deniers for a long time. And then their new found online strategy under new CEO Stephen Kelly seemed on the surface, a little strange:

That all said, they have for all intents and purposes been the only player who cover the full bustech ambit: micro, small, medium and enterprise, accounting, CRM, payroll, practice management and tax – something the new MYOB (who were within a whisker of being owned by Sage not that long ago) appears to want to replicate.

Last week I attended #Sleetercon 2015 (the US’s leading, independent multi-vendor accounting and payroll software conference, henceforth Accountex USA) where Sage brought out the BIG guns to convince me and the rest of the audience that they have changed.

It started with a confident and direct @Jennifer Warawa (Global VP, Product Marketing – Accountants) pleading with the audience to leave any long held, most likely affirmed & negative opinions of Sage (like mine) to one side. She explained how under new CEO Stephen Kelly they were changing and rapidly, and the sleeping giant was awakening from its slumber. They were developing and actually releasing cloud solutions, leapfrogging the others because by being late to market they can start afresh, for the new mobile world (that in fact came along after QBo and Xero came to market).

Then Stephen Kelly takes to the stage and down into the audience, no doubt trying to paint a metaphor for Sage descending from the ivory tower and listening to the people/market to deliver what the need/want.

Stephen Kelly giving his keynote address from off stage, down on the auditorium floor with the SleeterCon audience – @SUMInnovation via Twitter

Kelly is extremely charismatic. His James Bond-esque accent is overlaid with obvious self confidence, intelligence, serious experience and a sense of humility.

Technology companies owe the business community more than has been delivered to date, contends Kelly. Better solutions, where and how they are wanted and better service is needed. People aren’t afraid of technology, says Kelly and quotes the fact there are 4b smartphones in the world…but accounting and business systems have not served the customer the way they should. They have under-delivered on a promise to help run and grow SMBs.

Importantly, SMBs are the driving force in the world economy (they are leading the US jobs growth over the past 12 months). They need the business software industry’s help to grow and if they do, it will help move our world beyond the current horrific debt/GDP ratios that beset so many countries.

And from the “doing good makes good business sense” playbook – the market opportunity worldwide for online SMB business systems is huge. Particularly in the US, the world’s largest economy and one hugely under-penetrated by accounting software (Kelly quotes 60%+ of 28m businesses in the US using spreadsheets and manual systems).

Customer for life is Kelly’s mantra for Sage – one of those statements that appeals to investors, partners and customers alike. It’s all about Online yes, but at the client’s own pace. Desktop will continue to get support and development. Logically clients will switch, because the business case exists for them to switch, not through a forced changed. This is a growth strategy, not just survival.

Then Kelly brings Doug Sleeter on stage for a “fireside chat”. Whilst gentle, as is Sleeter’s way, he did press Kelly on some sensitive topics. One that was of particular interest to me (the former principal of a mid-market software consulting firm, who was reliant on software commissions for growth and survival), came when Sleeter pressed Kelly on what will come of the software margins partners, particularly in the mid-to-enterprise space, once relied on.

Kelly admitted the traditional channel partner’s business model is absolutely under threat (whilst pointing out, as is everyone’s industry at the hands of technology). He reinforced that unless you’re ADDING VALUE everyone can expect their business model to be severely disrupted. If the partners’ survival is based on just clipping the ticket with no value added, they will not survive. But, to his credit, Kelly took some ownership/leadership by explaining that Sage will be there helping to evolve the partner model to a more VALUE ADD, client-centric one.

He foresaw the system integrators, ecosystem experts and verticalisation as the future revenues for partners (same story as XeroCon 2015 I have to say)  and hadSage Match to back it up. Launched at Sleetercon, Match is intelligent matching of users and partners, not just on geography, but skill-sets, specilisations and consumer ratings.

Integration is core for Sage. Not just within the Sage suite but with other complementary systems and even traditional competitors. Sage now realise that we live in a connected, consumer driven world. Now they “get it” (on the surface and at the top anyway), delivery is another matter.

The key example products they use for proof of the new Sage:

My take – ALL, bar none, are immature (some like Value are extremely immature), owing to their late start in the Cloud space. This is either:

In Summary – a new perspective

Since following @Sholto Mac via Twitter and Periscope at Sage Summit 2015 and really rammed home at SleeterCon 2015, I am getting a very different perspective on Sage.

I and many others in the industry will now eagerly observe their continued evolution. Can they deliver mature products, that appeal to the market, quickly? Do they have the technology leadership to back up the marketing and executive message? When will they embedded financing? Only time will tell.

* As a closing side remark:  I now realise how similar Sage and MYOB are (sans the worldwide footprint for MYOB). Both long standing incumbents. Both are trying a multi-product, entry level to ERP approach. Payroll appears central to both companies future strategies. They both have been known to use acquisition as a key strategy for growth. They have both been criticised for being late to the Cloud realisation. Both are being severely impacted by Xero in their home markets – Xero boast >425,000 in AuNZ (MYOBs market) and >100,000 in the UK, (Sage’s home market). MYOB Advance, is built on the Acumatica platform – similarish to SageLive on Salesforce, kind of, but for the same motivation (speed to market at the cost of margin). Maybe, Sage should have followed through on the MYOB acquisition from Archer..?

This post and others can be found on LinkedIn: https://au.linkedin.com/in/mattpaff