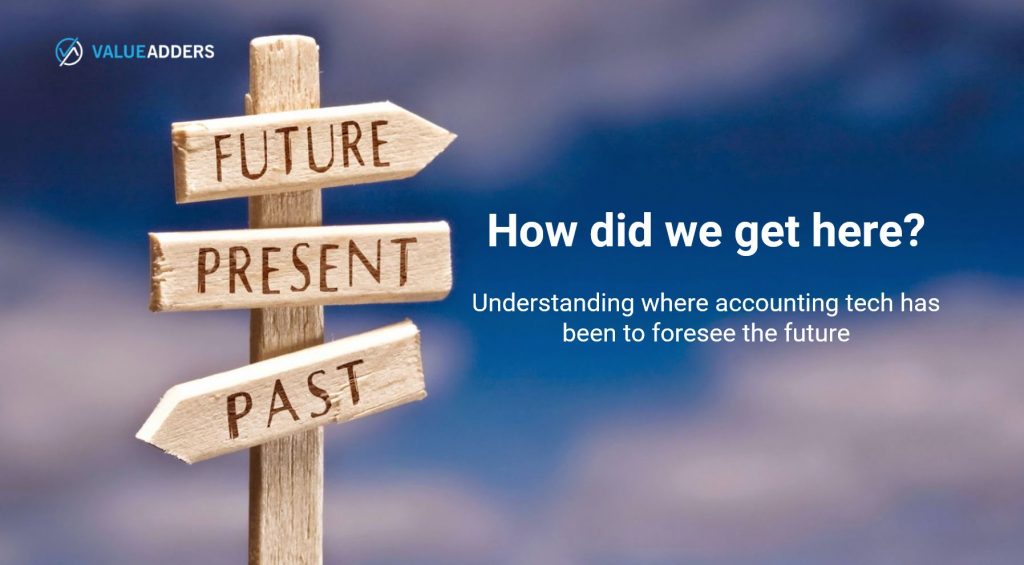 Understanding where Accounting Tech has been, to foresee the future

At the recent MYOB Incite, apart from playing semantics around “Disruption vs Transformation”, CEO Tim Reed espoused the line: “Today Defines Tomorrow”. I’d go a step further: I am a firm believer in understanding the past to navigate the future. In this article, I’m going to review from whence we came, so that I can shine a light on where I believe the accounting tech industry is at, and where we are heading.

One of my main contentions in looking back is to say that contrary to a lot of modern thought, the established players were NOT completely “asleep at the wheel” when it came to Cloud accounting through the noughties. Intuit launched QBo in 2004, before Rod Drury started work on Accounting 2.0 (which was to become Xero). The issue was the key people inside the accounting tech industry, with customers to service and shareholders to keep happy, saw and focused on, the problems online deployment would resolve (when compared to distributed software model), rather than what a significant paradigm shift cloud accounting would become.

Let’s go back and have a look:

I’m not going to go all the way back to the birth of Accounting Tech (I kind of did that with my article on Attache a couple of years ago: https://www.linkedin.com/pulse/20140812111631-140068801-attache-33-years-on-still-going-strong). Let’s start BC (before Cloud) in the 90’s, as DOS was coming to its end, I was finishing high school and the Windows PC (3.1, NT and 95) was starting to be widely used across Australian & New Zealand businesses.

Disruption and growth best described the environment around the accounting tech space. More and more companies were digitising their accounting and business management processes. The industry itself was growing exponentially, from a market with tens of thousands of customers at the start of the decade, to one with more than a million by its close, mainly in the Small end of the SME space. Companies previously relying on external accountants, shoeboxes and manual ledgers, were realising the benefits of digitised business systems.

Mainstays of the AuNZ industry like Attache & Sybiz were racing to get Windows versions of their software to market and striving for “DOS parity”. Many players didn’t make the transition and simply faded away as Windows applications took over.

Craig Winkler and Brad Shofer at Data-Tech Software, were early to market with a small business Windows product, distributing an adapted North American Mac product MYOB. Australian businesses loved the product so much, the regional distributor quickly outgrew and purchased the vendor and MYOB Australia was born. The story goes, NZ businesses loved it so much, they copied the idea and Windows NZA gold was born.

The perfect storm of PC adoption, DOS to Windows, Y2K and then GST (in Australia, only 14 years after the kiwis, always the innovators!) saw the penetration of retail accounting software in AuNZ absolutely explode from the period of the mid ‘90s to 2000.

And this is a key point:

They did similar things, with some nice enhancements like multi-taking and graphical printing. Its just that DOS to Windows happened to coincide with other factors that saw the industry explode.

Brilliant marketing (who thought the back of a bus was a great place to advertise accounting software?); relatively cheap, easy to use products; sold through retailers & accountants, not software consultants; fantastic channel development; government policy (every business received a $500 GST implementation voucher, that seemed like a great price point) sees MYOB and Reckon grow, both list on the ASX and just keep growing – whilst the established players, slow to react to Windows and the growing small business opportunity, drop away in market relevance.

Ask an accountant in 1995 to name the major AuNZ SMB accounting software players and you would have gotten names like Attache, Sybiz, Arrow, Business Manager, Prophet, NZA, CBA etc.  Ask an accountant today, and the response you get is unlikely to mention any of those. With the explosion of MYOB and Reckon, offering solutions at a fraction of the historic cost, established players struggled to compete and so took their mature product offerings upstream, where they could charge a premium price by focusing on consultative selling and featureset differentiation (multi-user speed, report flexibility, stock management etc).

I grew up in this industry understanding there were effectively 5 market segments: 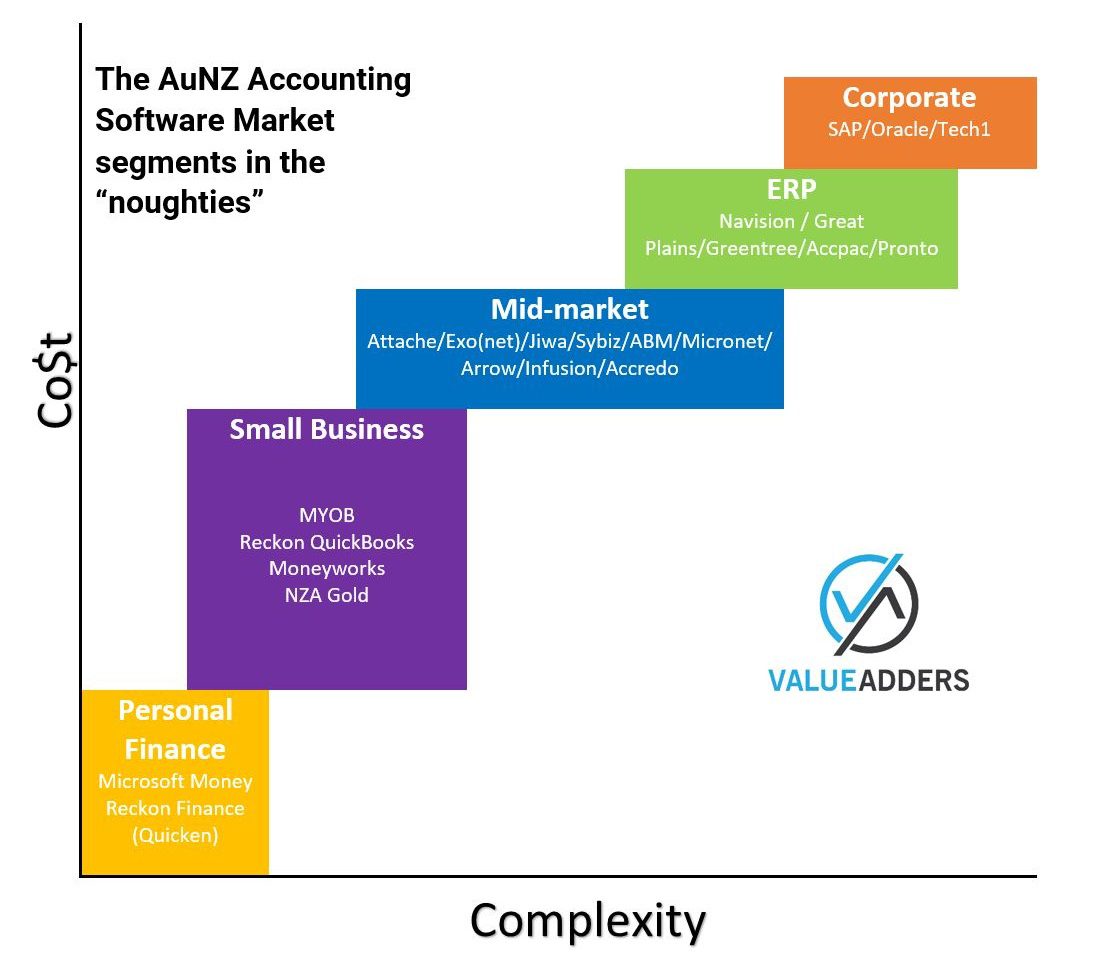 Price and complexity were the main variables. Complexity and Flexibility were widely recognised as directly correlated and therefore the more flexibility you needed the more you paid. Prices ranged from a few hundred dollars in the small business space, tens of thousands in the mid-market, hundreds of thousands in ERP and millions at corporate level.

Entry level systems were one off purchases, no extra cost for additional datasets, with optional yearly upgrades. In Australia, Payroll built into the platform, was THE reason people would upgrade every year, and thus became the recurring revenue trigger and a key strategy for MYOB and Reckon. Interestingly NZ businesses were more likely to use stand-alone payroll systems like Ace, IMS, Commac (all now owned by MYOB) etc and thus companies like NZA struggled with recurring revenues (and were also bought by MYOB).

Mid-market and above generally charged based on number of users (either registered or concurrent), allowed multiple datasets without additional cost and had mostly realised the benefit of maintenance (recurring revenue) with most having compulsory maintenance roughly 10-20% of initial purchase cost, annually. Some were early to adopt software as a service rather than product only (SAAS didn’t always equate to Cloud BTW) and were subscription only, even on desktop.

Many smart people inside the industry foresaw online as the future, way back as far as the late 90s and early noughties. Some with an appreciation for the recurring revenue model it would help create, but most with a longing for the solution to the problems that we all lived with under a distributed software model.

Windows NT Terminal Services (which became Microsoft Remote Desktop Services) and Citrix was how many of us in the industry warmed to the idea of online software.

Whilst the reliability and speed issues coming from under-developed internet services worried us, the problems solved by a controlled, single accessible environment and centralised dataset (per client) excited us.

The evolving thinking was simply: “chuck our accounting tech online and we can solve a tonne of problems”. It’s the reason why established players effectively tried to replicate their desktop version in their first crack at the Cloud (yes, I am talking Intuit, MYOB, Sage, Reckon etc).

At it’s core, it was not wrong thinking, it was just narrow thinking.

Meanwhile, by the mid-noughties, in New Zealand, a former EY employee, twice a successful entrepreneur growing and selling Glazier Systems and Aftermail started work on his next project called “Accounting 2.0”. Of course I speak of Rod Drury, and Xero. I feel Xero changed the meme on what Online Accounting was to become, not an application but a platform.

The stories go that Rod had a vision for accounting tech that was so far beyond conventional thinking, to the point few understood. He had no legacy nor clients to deal with. He wasn’t trying to solve deployment problems, he was trying to disrupt an entire industry and its thinking. Drury is long credited with saying “cloud accounting applications are a temporary category”, few have understood this until recently.

I’m sure he took cues from early SAAS success stories like Salesforce, and I’m sure key people like CTO Craig Walker played a significant role, but many credit Rod for the vision that became Xero, the company and the platform.

I could go on. Yes, I’m a Rod Drury fanboy, but no I am not a Xero zealot. The fact is Xero has been the leader poking the big, established bears, who are now racing at scale towards the future so different to that from whence we came from.

There are going to be casualties, as there was in the DOS to Windows evolution. But don’t think this current change to cloud is simply history repeating itself. DOS to Windows was effectively delivering the same, digitised accounting management functions with a better user interface. Subsequent steps like SQL; Hosted; fat client/centralised db (MYOB AccountRight Live) etc were “Windows dressing”.

The current evolution of accounting tech is far beyond that. Rather than coinciding with other factors, the current evolution embeds external influences at its core. Its actually the death of accounting applications and the rise of connected business platforms. It is: mobility; Advisor portals; Big data; automation and Artificial Intelligence; Fintech; Agile, APIs and Microservices; Desegregation of the market; and much more…we’ve only just begun!

For more commentary by the author on Accounting & Payroll fintech: