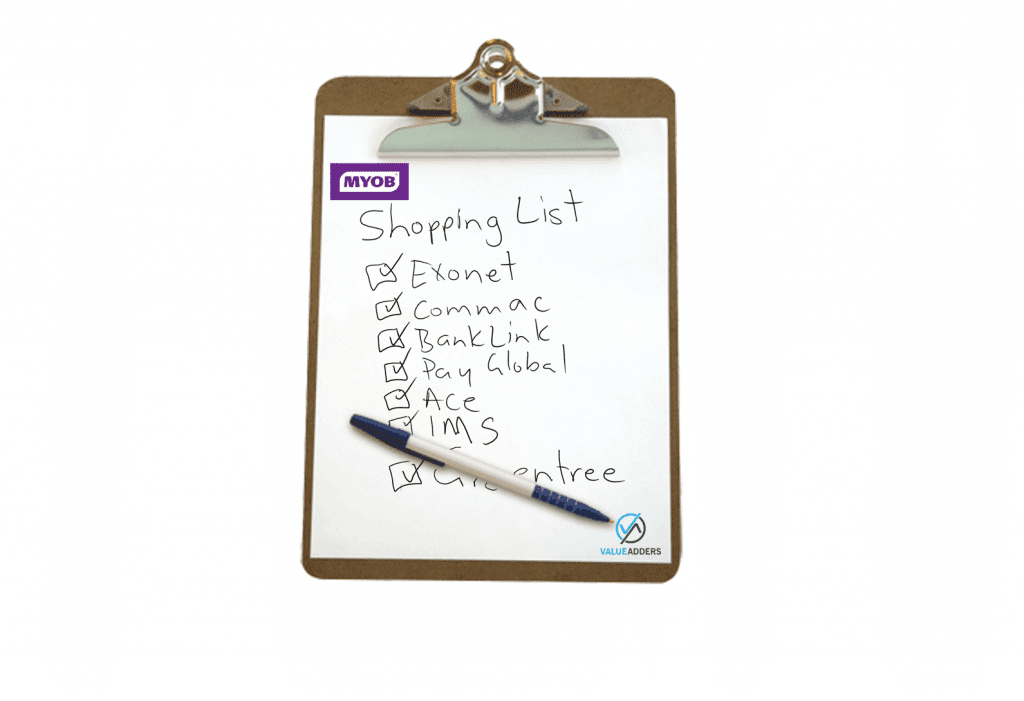 This got me thinking, who else might be on that list? Based on what we know in the public arena, throw in some gut-feel and some muck-raking, here’s my guess at the MYOB shopping list:

With an ailing share-price, disgruntled shareholders and an unusual price driven cloud focus with ReckonOne, Reckon might be a more realistic price-point acquisition target for MYOB than 6 month’s ago when rumours were around of a done deal. They still have a large base and channel…

Saasu have really been upstaged by Xero in recent years, maybe the owners *might* just take some money and run? Unlikely. Recent rumours of more capital raising, a worldwide focus (outside of MYOBs stated market) and the fact they would have rejected substantial offers before, probably makes Saasu long-odds for a MYOB buy-out.

MYOB have stated they are eyeing the mid-market. One might see this as either:

Whatever the reason, the mid-market is primed for disruption/consolidation, by a major player (or the disparate parties coming together themselves for a roll-up). The “beyond entry-level” space is highly disjointed, and full of small developers with generally ageing technology stacks, who will struggle to transition through to pure-cloud and compete with the connected systems of the future.

With the OEM agreement with Acumatica creating the MYOB Advanced product, MYOB have a great product and huge opportunity to seriously compete with Netsuite and the Salesforce ecosystem in the mid-market into the future.

Mopping up another existing player would give MYOB:

So who are some of the mid-market players most likely:

Go back further and there’s NZA and you could ALMOST argue Exonet was also Kiwi – it began in NZ before Sol6 bought them and of the private owners who bought and sold it from and to MYOB, Bruce is certainly still an All Blacks supporter…

This makes the likelihood of more kiwi acquisitions highly probable.

Potentially with the new MYOB People offering in mind, MYOB have been very Payroll focused with their acquisitions. With Sage owning Micropay and WageEasy, there aren’t too many stand-alone payroll providers with sizeable client bases out there. My possibles and probables list would include:

As you can see, there are plenty of acquisition opportunities for MYOB left. We can rest assured that Greentree is not the last announcement this side of a possible Bain exit late in 2016. The attitude of the directors of the respective targets will be the ultimate determining factor in who is next.