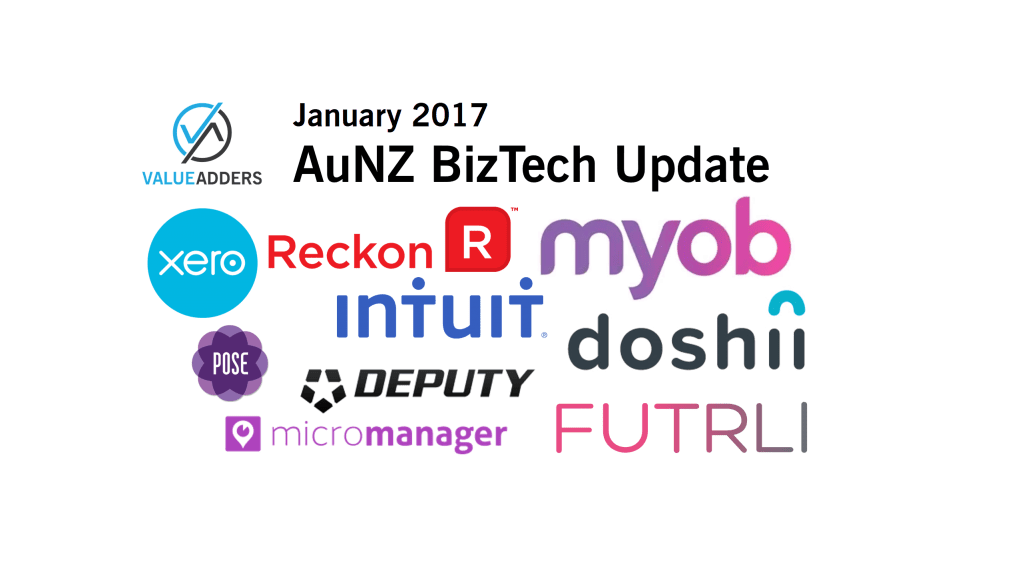 Wow, what a start to 2017! I’ll try not to get too political, but the first item on my list of BizTech news in January means I can’t leave politics aside…

As a left leaning middleist, my faith in humanity has been tested a little the last few weeks. Kudos to the likes of Canadian Prime Minister Trudeau and the Dutch government for not being silent on US actions. My opinion, for what it is worth (knowing opinions are like armpits, we all have a couple and most of them stink), is that Australian and New Zealand politicians should take the opportunity to do what is right not what they think might see them re-elected. I remind messrs Turnbull and English of:

Its better to die on your feet, than live on your knees

Anyway, I’m not known as a political blogger, let’s get to biztech:

Based in the U.S., Smith has already served as a Xero Director for two years and Chairs the Audit and Risk Management Committee.
Liddell’s departure offers a great opportunity for the addition of another female to Xero’s board. I might be so bold as to suggest that, as it stands, one female board member plus the CoSec is not good enough for a listed, multi-billion dollar company in 2017. #GenderDiversity #CongnitiveDiversity

MYOBs valuation under more than one microscope

It seems MYOB’s share price was a bit of a flavour of the month.

AFR’s Jonathan Shapiro was the most recent to comment, suggesting executive bonus structures at MYOB hint to a September exit for major shareholder Bain Capital, amongst other interesting analysis.

One of my favorite bloggers is Anders at Find The Moat Research. This month he took a deep dive to compare MYOB and Xero valuations and question the similar capitalisation the market is placing on the two.

Brent Freeman at Simply Wall St was another to question how the market is valuing MYOB, but from a completely different viewpoint, using an Intrinsic Value calculation.

I felt it was noteworthy that someone who was so very present at the recent QB Connect, as one of the leaders of Intuit’s development team, Vinay Pai left Intuit to join POS/Payments company Clover / First Data Corporation as SVP of engineering in January.

Reckon have appointed a new PR company Havas PR and it appears that we are already seeing more of the father/son Rabie CEO/COO duo in the news and alike.

Interestingly, whilst there have been no announcements to the sharemarket since October, they announced two source code acquisitions in the media recently whilst directly criticising investors.

Micro-Manager – the NZ based product “offers a cloud and mobile-based time sheet application”.

Given the logo colours, it looks like Reckon beat someone else to the punch on these two…

Crunchboards becomes the opposite of MYOB…

Crunchboards has rebranded as FUTRLI. Anyone else notice how the new logo is effectively the opposite of MYOBs?

Just ’cause its a major bee in my bonnet, its January 2017, Larry Ellison has a few more billion in his bank account then he did 12 months ago and NetSuite still have a horrible banking transaction/reconciliation system. Third parties like Nolan and ERP Fast Forward just shouldn’t exist. Major development (and analysis of the products new customers are “outgrowing”) is needed under the new Oracle umbrella. And fast.

Wow, OpenVentures came knocking with their chequebook drawn and were not going to be shot-down, no matter the cost. Deputy rocketed to the top of the “ecosystem” AND workforce management spaces in AuNZ in January, with an amazing investment from US VC (US$25m) for a minority share that must value the company a sizeable double figures times revenue (by my reckoning)! Well done to Ashik and team!

In a very different league to Deputy, POS digital plumbers Doshii raised some cash in January as well.