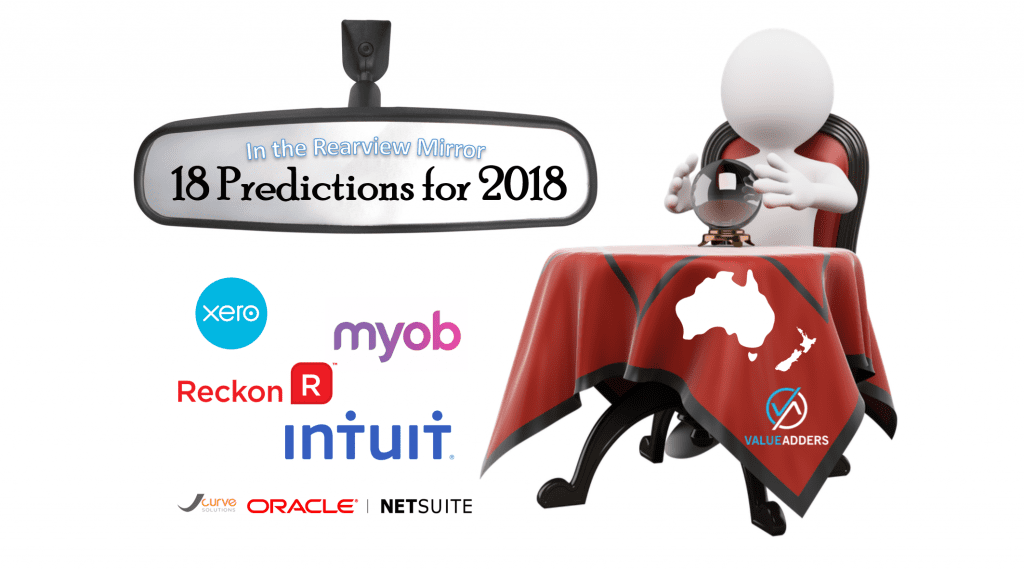 Predicting the future is hard.

Holding yourself publicly to account for your predictions is even harder, and probably why few people do…

Here they were and here’s how I went:

Well, the truth is we’ll never know. In May MYOB withdrew from the deal before the ACCC had a chance to officially rule. One could argue they were just pre-empting the result given the ACCC had released a letter of concern. But, I still think they wouldn’t have blocked the deal with enough, genuine research.

2. Reckon to find a home for its Legal Practice division

2018 was a massive year of consolidation and investment in Aussie HR tech, including:

4. Single-Touch Payroll to be delayed

In March, Saasu founded Marc Lehmann published an announcement that he was transforming Saasu, one of the original leaders in online accounting tech, refocusing the business on Australia and “sole traders, micro businesses, consultants, contractors and early stage e-commerce.”

In November, Intuit showed the continued stellar growth in the sector announcing as at the end of October, QuickBooks Self-Employed “subscribers grew to approximately 745,000, up from roughly 425,000 one year ago.”

In October it was announced that Bain were exiting MYOB through a trade sale to KKR who subsequently made an offer to acquire the remaining assets from shareholders, which the MYOB board on December 20 advised that it was “not in a position to recommend the revised proposal”, subsequently only 4 days later approved….

I’m not sure on this one.

On one hand, Intuit closed its Singapore (Asian) office, indicating Asia was not in its immediate growth plans.

On the other, Xero remain very heavily invested in Asia and Terrapin launched to great success their Accounting & Finance Show in Singapore in September with Cloud Accounting (particularly Xero and local player Financio) front and centre and the key talking point.

In Japan local player Freee continued its amazing growth, with US$60m Series E capital raise in August. Across the rest of Asia we can see local, emerging players in markets like Thailand (Flow Account), Malaysia/Singapore (Financio) and Indonesia (Jurnal).

Then you have Intuit taking a partner model for QBo into South Africa with EasyBiz, where Xero and Sage are both very present and active.

Intuit are investing heavily in India and Brazil.

But, the reality is, the key battlegrounds and focus of the major vendors in 2018 and for the foreseeable future remain the UK and then probably Canada.

8. Xero to crack 1.5 million customer ahead of 1H19 reporting time

Per its Q4 Press Release.

The fall-out from the MYOB / Reckon no deal created much debate, discomfort and a significant focus on the AuNZ Accountant’s software space, including tax.

In late 2017 Sage announced it had taken Handitax to the Cloud.

In October, Intuit announced a partnership with LodgeiT for integrating a Tax solution with QBoA.

In November NZ company TaxLab announced its intention to enter the Australian market.

11. The JCurve / NetSuite relationship to evolve

It appears JCurve have quietly ended its dalliance with MYOB Advanced, with all mention of the product removed from the JCurve website and the only mention in FY2018 accounts being: “Net Profit Before Tax Financial result impacted by project losses incurred from MYOB Advanced projects”. Still no official announcement has been made, I await their 1H2019 announcement.

12. Reckon to declare a special dividend and then de-list

WRONG (but I was right, outlandish)

WRONG (but I was right, outlandish)

I don’t think it will happen, but it probably should

Some think it will happen, I don’t

16. Sage will not acquire Xero

In March, Rod did go the way of Steve Jobs circa 1985. Kind of… Obviously it seems a far more amicable exit for Rod than Job’s original exit from Apple. Will we see him back to right the ship circa 2028? 🙂

18. MYOB will not be the next Dick Smith Electronics

So far CORRECT – MYOB lives on and is about to enter its third life as a private equity owned company.

All in all, not a bad year for predictions from me. Probably grading myself a B. Aiming for better in 2019.

Watch out next week for my 2019 edition. This year I will be once again stepping up my game, putting my proverbial “balls (reputation) on-the-line” and hold myself to account come years’ end. #WatchThisSpace