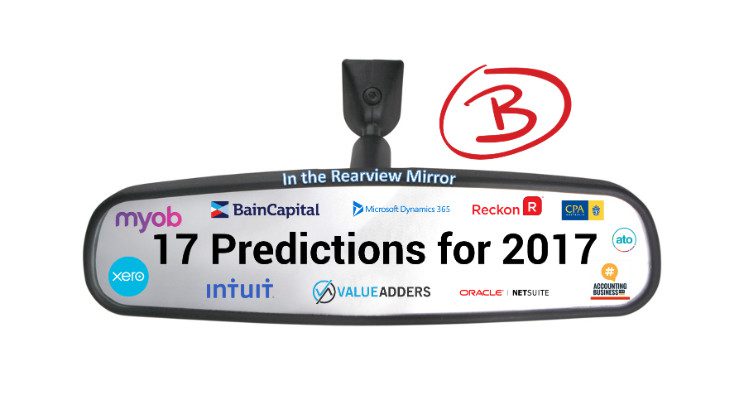 For the second year in a row, I started last year with my crack at being a futurist, by publishing my predictions for the Biztech/AccountingTech industry for the year ahead. Unlike most other people who make bold predictions, again I am happy to hold myself to account on how I went.

I’m happy to proclaim my 2017 edition easily surpassed the accuracy of my predictions for 2016, and in a world of continuous improvement, my 18 for 2018 will be even better…

1. Xero to announce 1 million subscribers with their FY2017 results

I am pretty pleased with this one. On March 30 (YE March 31 2017), Xero announced it had surpassed 1 million active subscriptions. Technically they announced separate to the year end results, but my point (clearly made if you read what I wrote) was they would hit 1m customers in late March, which they did. Let’s mark it down slightly for the wording, not the prediction itself. 9/10

As the chart shows, this included a significant acceleration in subs in their Q2 and Q3 of the FY17, which I didn’t predict.

Indeed Bain sold down significantly in 2017, from 57.7% to 23.1% “to a range of institutional and sophisticated investors” announced on February 24 and “via an underwritten block trade” in early December. They retain 2 board positions as their total shareholding exceeds 20% (per the terms of the listing). BUT I did use the word EXIT, so one could argue selling 60% isn’t exactly exiting…let’s just say I was 60% right… 6/10

4. Reckon not to be listed (in its current form), by year end

In 2017, Reckon was officially split up, starting with a “demerger” of the document management division (GetBusy) on the UK AIM exchange, which they did in August.

Then came the announcement of the sale of the Accountant’s Practice Management division to MYOB in mid November. (ICYMI here are my thoughts on the deal).

Sage Australia Managing Director Alan Osrin moved on in September after nearly 30 years at Softline (which was taken over by Sage) and then Sage. It doesn’t get more significant than that!

Also moving on in July was former MD of MicroPay and VP of Sales – Accountants, Mike Smith.

Lukas Taylor, former GM of SageOne and Director of Partnerships & Alliances, also moved on in June.

In retrospect, this is a little too subjective for my liking. I could say I was right, all the big technology (and accounting) players moved from its coming to its here, but each individual bookkeeper and accountant will have an opinion on this.

For my sins of “airy fairiness”, I’ll mark this one down as a fail and in 2018 will focus on measurable, objective predictions. 0/10.

7. The rise of Governance consulting

Again, I risked “airy fairy” subjective outcome here, but I genuinely think we saw a big uplift in the Governance consulting space in 2017. I feel it was helped by the failure of the CPA on its governance (and the attention it drew in the media and in the advisory space). I think its also supported by the rise and rise of the Australian Institute of Company Directors (have you been to one of their annual updates lately?) and Governance Institute, as well as GovernRight where I spend most of my time. And this Robert Half Salary Survey that was published earlier in the year also highlights that “Australians working in corporate governance sector are amongst those most likely to enjoy double digital wage growth in 2017” (i.e. against an environment of flat wages growth, the rise of demand for Governance consulting is driving double digit wages growth in the sector). I’ll mark myself down for subjectivity but up on the back of the Robert Half survey: 5/10.

8. More of the same from NetSuite

From all of my contacts inside and outside of NetSuite, the consensus was that post Oracle take-over NetSuite, hasn’t yet changed much. Big gaps continue to exist (and widen), between automated small business functionality (the likes of Intuit and Xero are rolling out to their clients) and the general usability of NetSuite (eg entering a customer payment vs automation from bank feeds)… 10/10

With specs still evolving and some of the larger technology vendors already telling the ATO they won’t be ready for the July 1, 2018 launch of STP, the ATO is already being flexible with the deadline:

We know some providers will not have their products ready by 1 July 2018. They will need to use our  guidelines to provide evidence so we can consider deferrals for their employer clients.

This technically does not constitute a delay YET, but l’m going to call it a 3/10.

10. But the ATO will meet some deadlines: Simpler BAS and GST on Intangibles

11. The New Payments Platform will be delayed

It didn’t launch “2nd half 2017” but is launching “after Australia Day 2018“. I am super excited by this, not just because I was right about a delay, but because we are about to get real-time payments between banks via bank account details, mobile numbers, email addresses… In spite of the huge criticisms our banks cop, Australia (when I compare to what I’ve seen in the US in particular) is a world leader in banking and this will certainly help keep it that way! 10/10

12. The new Microsoft Dynamics will do well in Australia

I got ahead of my self on the “hype cycle” here. Whilst I think the product suite covering ERP, CRM, integration to Office and Power BI, LinkedIn, Sharepoint, Teams, even Surface… is going to be ridiculously compelling, I think Microsoft have a channel problem. They want to bring Dynamics 365 Enterprise (effectively the product formerly know as AX and Axapter) down to the mid-market and their aggressive pricing changes in late 2016/early 2017 highlight this, yet the implementation VARs (I’ve had dealings with) are used to implementation projects running into the high hundreds of thousands to millions. The channel and the product licencing seem out of whack.

In 2017, Gartner put Microsoft out in front in its Magic Quadrant for BI:

“Millions of users across hundreds of thousands of companies”

In a very short space of time, Microsoft have “gone from selling the dream to trying to deal with the hoards”

Thanks to Peter Dutton, Malcolm Turnbull and the right wing of the liberal party, the protectionist, populist changes to the 457 scheme in Australia announced in 2017 absolutely helped here.

With businesses across Australia scrambling to get compliant with the obligation to take “reasonable steps, at reasonable times” to monitor employee work rights (ongoing, not just at time of recruitment – per the Migration Amendment (Reform of Employer Sanctions) Act 2013) vSure is experiencing unprecedented growth ahead of the new arrangements effective March 2018. 10/10

15. The Accounting Business Expo to deliver a successful inaugural event

Unequivocally correct. All reports from the event were positive and with the acquisition of ATSA from SmithInk this year promises to be much bigger. Tick. 10/10

I thought this tweet from Intuit Small Business Head during Xerocon US, was poignant:

Love it when our rivals say self-employed is not important and then try to copy us. Welcome!

Here’s the announcement that Sasan was probably referencing from Xero about the launch of Xero+C.

I know this is only the US at this stage, but this product offering is clearly focused on the micro space.

Whilst they did announce the acquisition of Paycorp in February and the Reckon Accountants Division in November, I can’t really claim them to be “another legacy mid-market acquisition”. Even though Reckon was the first company I listed in my likely targets list

Who else is on the #MYOB $MYO shopping list? I consider the #accounting & #payroll software companies most likelyhttps://t.co/qwBitREkju

So there goes, compared to last year’s effort, I’ve made huge strides towards legitimate claims as a futurist, but… I still have a ways to go.

My 18 predictions for 2018: more measurable, less subjective, more scientific – follow me on the socials and keep an eye out later in January!

Check out my blog: https://valueadders.com.au/articles