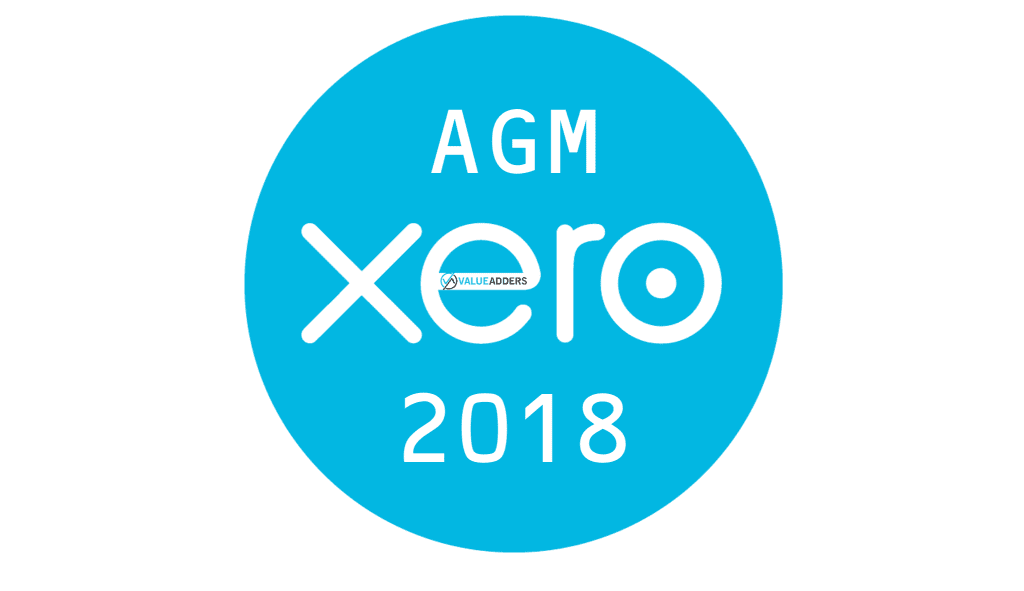 Last Thursday, August 16 2018, Xero held its Annual General Meeting (AGM) at The Establishment Sydney. Whilst not in the league of a Xerocon as far as attendance (a factor of 100 fewer attendees) or entertainment (I remained 100% sober, even at the after “refreshments”), I have been a regular of Xero AGMs for the last few years due to the access it provides to senior management and the board, both formally during the meeting and informally before and after. Access that filled in a few gaps for me on recent announcements and showed the dynamic of the leadership of the newly, post-founder-succession company. Here are 5 takeaways I garnered from the event:

This year was the first meeting with new CEO Steve Vamos and former CEO Rod Drury in his new role as “Non-Executive Director”. Rod’s presence was still felt, stepping in to field a couple of the questions directed at the Chair.

Rod’s role is described as being freed up from running the global company with some 2,500 staff to focus on what he loves, which is the product vision. From Chair Smith’s description at the AGM and that of the ASX Announcement at the time of Rod’s “succession” was announced, I really struggled to understand how it can be a NED role and not a Chief Product Officer role, Rod is fulfilling.

Question: I’m struggling to understand @roddrury‘s role & how it is “non Exec”
Answer from Chair Smith: he has no office, no reports. The role of nonExec has evolved to more than flying in for 4-5 meetings/yr
Rod: I’m trying to become world’s oldest pro snowboarder#XeroAGM $XRO

As you can see from my live tweet above, I asked the Chair to clarify why Rod’s role and how it wasn’t an executive directorship, rather than a NED role?

The response, as you can see was he has no office, no direct reports, so he’s not an executive…

I still struggle to understand how you can drive product vision without executive powers/responsibilities. The office is no big deal. The lack of direct reports I question. If Tony Stewart (Chief Product, Platform and Data Officer) has historically reported to Rod, how do Rod and Tony interact now Rod is a NED and Tony does NOT report to him? Who really directs the Product team? Who really makes the “captain’s calls” on critical resource allocation decisions on product development?

But does it really matter? From a governance perspective, Rod, as founder, is far from independent, so is there really much of a difference between NED and ED? Maybe.. If, as Rod says he is investing significant time on non-Xero activities like snowboarding, surely that gives Tony time to be the real CPO..?

At the 2016 AGM, there was one female on stage across Board and senior management. At the event I asked the “elephant in the room” question, and referenced it in my post on the event:

Where’s the Gender Diversity? Only one person (senior management and Board) on stage was female. Rod responded that it is recognised and they are actively working on it (internally and at board level with Sam Morgan’s departure), but won’t compromise on quality over diversity.

Fast forward two years and what a different story:

The AGM had 10 on stage from the board and senior management with an even 5/5 split men and women, comprised of (from right to left across the stage):

On top of gender diversity the group also traverses the core markets with Kiwis, Aussies, Poms (British) and Yanks (Americans).

3. The new “deployment of capital” framework

An interesting take away for me from the meeting was the discussions around a new “capital deployment framework”. It was raised during the meeting and in response to my question regarding the new partnership with Gusto in the US:

Q: drilling in on the @GustoHQ partnership what’s that mean of the Monchilla acquisition and @Xero‘s US Payroll?
A: this was a redeployment of capital decision. Market is very outsource focused. Does not fit our margin profile. Existing customers to be migrated over#XeroAGM $XRO

Just a quick background: over the years, Xero have invested significantly in adding Payroll to their US offering, firstly through their own developments and then via the Monchilla acquisition. Recently they announced a strategic partnership with Gusto.

I didn’t feel it was 100% clear what that meant of Xero’s sunk cost on US Payroll. Would they continue to have a US Payroll offering? What of existing US Payroll clients?

4. They remain a NZ company, despite abandoning the NZX

Two questions, one asked by me, surprised with Xero’s standing as a very firmly kiwi company, listed on the ASX.

Given Xero is an ASX listed company and holds its AGM in Sydney, when will the results numbers be discussed in $AU rather than $NZ?

It won’t. The $NZ will remain the report currency.

How come, now Xero is solely listed on the ASX, it does not have a motion on Rem. on the AGM agenda?

5. The market is not made up fully of educated investors

Another Xero AGM, another old dude asking “will XRO pay a dividend next year?”

Seriously, why would any investor invest in Xero and expect/want dividends? The mentality of the Australian (dare I stereotype) retired, self-managed Super fund investor, to want dividends does my head in and shows the lack of understanding in the market. US investors almost punish companies for paying dividends – it indicates they have run out of growth channels to invest in. But, Australians apparently want dividends, even in their high growth companies… shoot me!

I’ll go on record here: I invest in Xero because I think the company will do better with my capital than I might otherwise do myself – through capital growth. And they’re doing OK at it. 3X my money in 18 month’s since I sent this tweet:

For what it's worth: with 1m customer announcement approaching, cash flow break even in the ballpark, booming industry, I say BUY $XRO #long

Xero
Previous ArticleHey mid-market, get your heads out of the sand, Xero & Intuit are coming!Next ArticleXerocon 2018 – The review no-one else will write