Recently former Intuit employee David Leary and his fellow #CloudAccounting Podcaster Blake Oliver declared the changing of the guard atop the three “big whales” of worldwide SME accounting tech (Rod Drury moving on from Xero CEO, Brad Smith likewise Intuit and Stephen Kelly unceremoniously removed as Sage CEO) signaled a clear end of Cloud Accounting 1.0 and the industry moving into the 2.0 phase. It’s not only a point hard to argue, it is one that for me, was clearly demonstrated at this year’s edition of Xerocon (South).

Xero, under Drury’s visionary founder leadership, was once the emerging up-start start-up, amassing a cult-like band of Xealots. Now they are the big dog in town (in AuNZ I mean). The new incumbent, attracting 3,702 attendees to their conference, many of whom fit neatly into the early and even late majority groupings under Roger’s “Diffusion of innovations curve“. 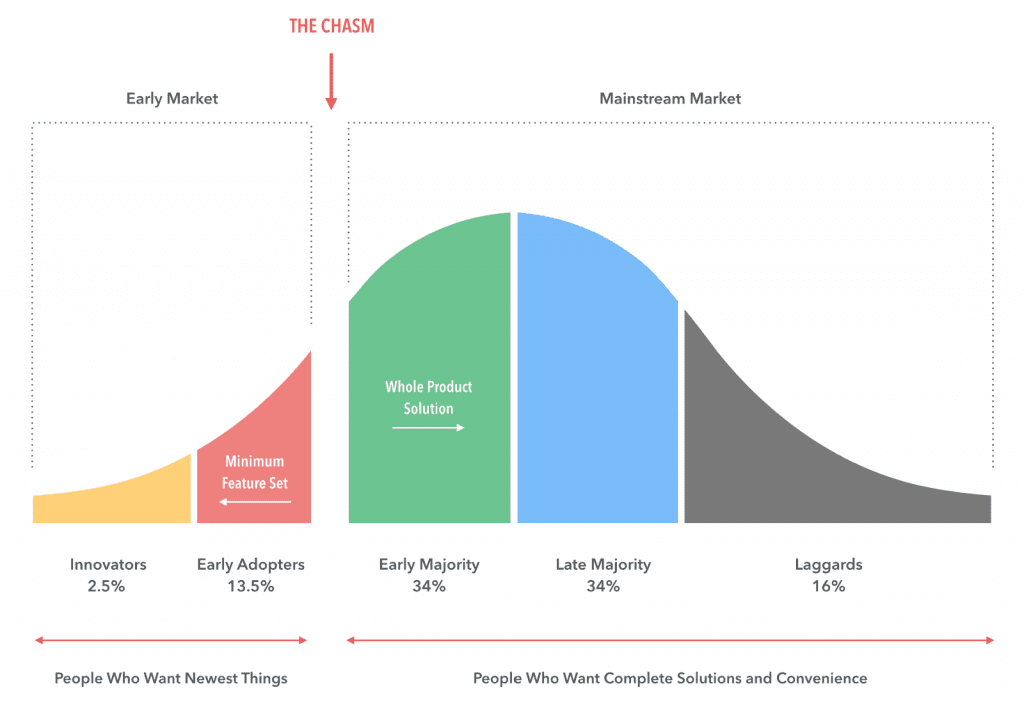 Xerocon is no longer the conference exclusively attended by innovators and early adopters. They now have the largest (paying) subscriber base across AuNZ. We’re weeks away from 1H19 results that will (I think) show them generating more revenue than the former, purple incumbent. They now have a market capitalisation around 4X said former incumbent (it wasn’t that long ago that Bain relisted $MYO at a higher market cap. than Xero at the time).

And the thing at Xerocon 18 that completely summed up where Xero, CloudAccounting in Australia and the audience in attendance is now at – the “innovation” that got THE loudest cheer of the entire event was… no, nothing to do with AI, nor machine learning nor blockchain nor mobile nor [think of something new and innovative and add it here], but the loudest, most raucous cheer…. a running total on the GL transaction report… [insert da da daaaaa music here].

And herein lies Xero’s challenge moving forward. How do they continue to innovate without getting dragged into “listening to their customers”. I know that sounds completely anti-intuitive as modern tech mantra is “listen to your customers”, and that cheer about the running total is pretty hard to ignore. But the reality is the backlog of features like the running total will only grow larger and larger as Xero ages and expands into more markets and industries. And the chorus of customers and partners starts to get louder and louder:

But I’m sorry to say, customers whilst being a great source of inspiration can in fact be a drag on innovation. Henry Ford once said: 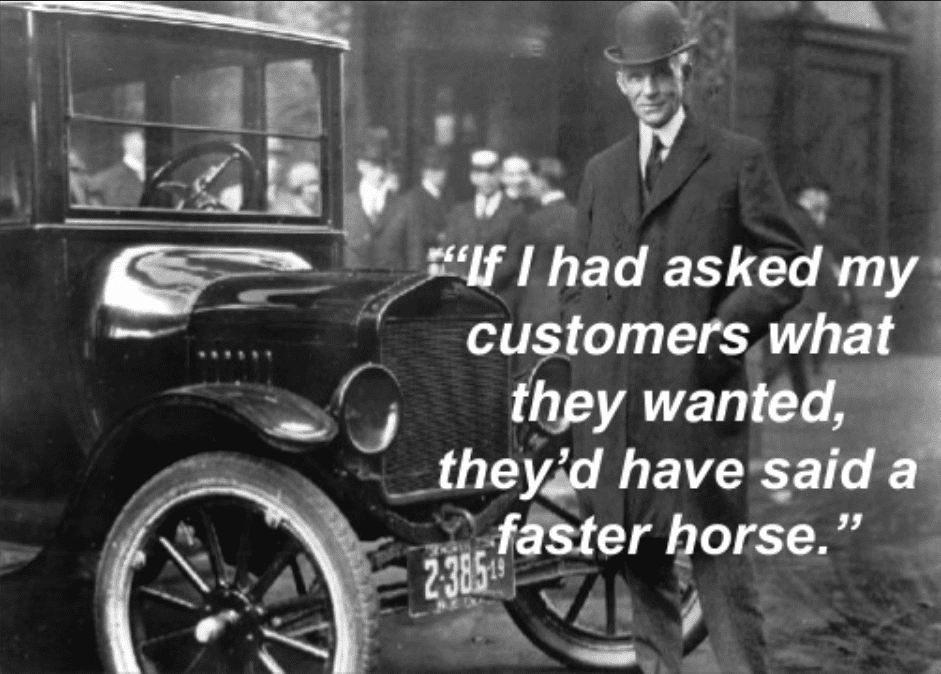 So a MASSIVE question I have with Rod Drury winding down in day-to-day involvement in the product team particularly, the evolving of the business to incumbent status, the growing chorus of staff, customers and partners who “know” what Xero need to add next, the expanding regionalisation requirements, and the inevitable bureaucracy of product decision making that forms in a maturing, 2,000+ headcount business – how the heck do they continue to drive innovation as the business and technology continues to mature and not become the next encumbered incumbent like MYOB and Sage who resorted to acquisition for innovation and ultimately have been usurped by the more nimble, innovative Xero?

I’m not sure Xerocon 2018 answered that question for me. If anything it only reaffirmed why I keep pondering this. After all, consider CEO Steve Vamos’s main stage apology for “recent sub-system performance issues” – its great to acknowledge and apologise, but apologies like these are a bit of a commonality among ageing vendors…

Then consider Steve’s five (the only time Steve talked in anything but “The Rule of Three” BTW) BIG opening keynote announcements, with a critical lens:

I’m not meaning to be negative, because about Xero and Xerocon, I am genuinely positive. I’m just providing food for thought. Xero evolved as the young, anti-incumbent. Its now effectively the 12 year old incumbent and it faces the same challenges as MYOB before it, only on a larger, more genuinely global scale.

For what its worth, I do think Xero have the wherewithal to manage this transition. Perhaps Gareth Cronin, Executive General Manager – Partner Products, summed up their approach moving forward best, balancing innovation with customer demand: Xero are now making:

Step by step, careful changes, pulling you with us

I’d call it evolution not revolution, because they are no longer just dealing with innovators and early adopters, they have the masses to keep happy.

Perhaps Rod the NED is part of the answer?!

A lot of respect was paid to founder Rod Drury across the conference. The new CEO Steve Vamos made a significant point of sharing his limelight with Rod perhaps focused on easing any concerns of investors, partners and staff of Rod disappearing or being forgotten in the future Xero.

Rod’s new role of Non-Executive Director and effectively, as it is being described, product innovation lead, should perhaps be the answer to my innovation questions. A lot of research is emerging that highlights genuine, innovating thinking needs time and a lack of distractions to be nurtured – something that seems so hard in a 24/7, social media crazed world.

During Rod’s keynote late on day two, he talked of being freed up from the day to day, to ponder and help build the future. A future in which cars drive themselves and partners and customers find their “ah ha moments” with AI and ML embedded in the Xero platform. Where can the machine be better than humans, to help build better businesses and ultimately better lives? Perhaps Rod the “world’s oldest pro-snowboarder”, will get the thinking time to genuinely drive the next wave of Cloud Accounting 2.0 innovation. I am eager to see Rod’s Xerocon 2019 keynote to see what he and Xero can deliver, to ease my scaling innovation concerns.

ReceiptBank: is the writing on the wall? I found a real juxtaposition in the spend on the conference by ReceiptBank and the writing clearly on the wall presented by Xero with Hubdoc and Email to Bills being two of the key announcements of Xerocon2018, on top of Xero Expenses announced at Xerocon2016.

ReceiptBank have done an amazing job growing as they have, evolving their technology and beating off competitors with an enviable balance of marketing, product and channel management.

Insiders tell me Xero was within a whisker of acquiring ReceiptBank 2-3 years back, only to back-flip late in the piece over concerns about cost vs cost to replicate/cost to build a better, AI driven alternative. Since then, ReceiptBank have seemingly gone from strength to strength, raising $50m in capital to seemingly spend big on customer and partner channel acquisition. Xero are taking their sweet time to come close to replicating / building their own thing with Xero Expenses and now Email to Bills taking much longer than internal product champions may have thought…

Rumours have abound in recent times, as to whether ReceiptBank themselves may make the leap from add-on to accounting tech player, with industry insiders commenting on product direction in the UK and whether accounting integration was needed for micro-businesses.

Then there is Hubdoc, front and centre at Xerocon with the two Jamie’s (founders) on stage and welcomed wholeheartedly into the Xero family. And before any ReceiptBank lovers jump down my throat and tell me how they use Hubdoc alongside ReceiptBank, just let me pose the combination of Hubdoc, Xero Expenses and now Email to Bills…? IMHO I start to ask as to whether Xero have effectively boxed Receipt Bank into a corner, where they become a much smaller value add-on and many Xero customers and bookkeepers who may have looked at ReceiptBank, now don’t as they have native alternatives..?

Now compare this to the fact ReceiptBank had:

Doing the maths in my head, that $50m won’t last long on that kind of spend. So I ponder… perhaps ReceiptBank see the writing on the wall and are going to go down swinging… Or perhaps I just don’t know what I’m on about..? Please let me know what you think!

It is fair to say, the changing of the guard has happened. Much like MYOB usurping Attache in the early 90s by leading the small-business, user-friendly Windows wave, it took 25 years for MYOB themselves to be usurped by the cloud tsunami led by Xero. And there are many similarities one can draw from then and now, not least of which the education change I foresee about to occur in Australia:

Echoed across the conference was the central theme of “Human”. Steve Vamos talked of Xero being the only company he’s been at where Human was a core, shared value. And as Steve put it:

Many of the guest speakers offered a perspective on the human condition. From Gill Hicks, the London bombing survivor, who challenged the audience to consider what was truly worth living for?

To Mark Manson who sticks his finger up at the self-help brigade to say everyone is flawed, deal with it. Accept stuff happens. Accept pain is part of the human condition and grow from it.

Another speaker at #xerocon talking about the perspective of death
First @IAmMarkManson, then @MADforpeace and now @SharonsNetwork
A theme. pic.twitter.com/k10p9dkPZ5

Many philosophers through the ages have pondered their lives and belief systems from a lens of the finite-ness of ones existence. Epicurean and the Hedonists, to existentialist like Sartre. Perhaps the repetitive theme of Xerocon along this line, is to challenge the audience on the general fear of “the coming of the robots”. What does it mean to be human? If a robot can automate a task out of existence, perhaps that task doesn’t drive us closer to being human, in fact the opposite. Don’t fear the robots, embrace them, they will make your life better! And they are coming, rest assured!

Enough of the outdated number already

Impressive yet 6 month old numbers… How about delaying #Xerocon 2019 until after 1H20 reporting so the numbers are up to date… 😜 pic.twitter.com/neEj1SBSJe

A frustration of mine with the last couple of Xerocons, is a conference in September, regularly referencing numbers for March. Xerocon is held just weeks before 1H19 results are due. These numbers will undoubtedly see Xero surpass 1.5m subs. Why do we need to still be talking 2H18 numbers? Why not announce updated numbers at your showcase event?? Or run the event AFTER the 1H announcements..?

Matt attended Xercon 2018 as a guest of Xero.